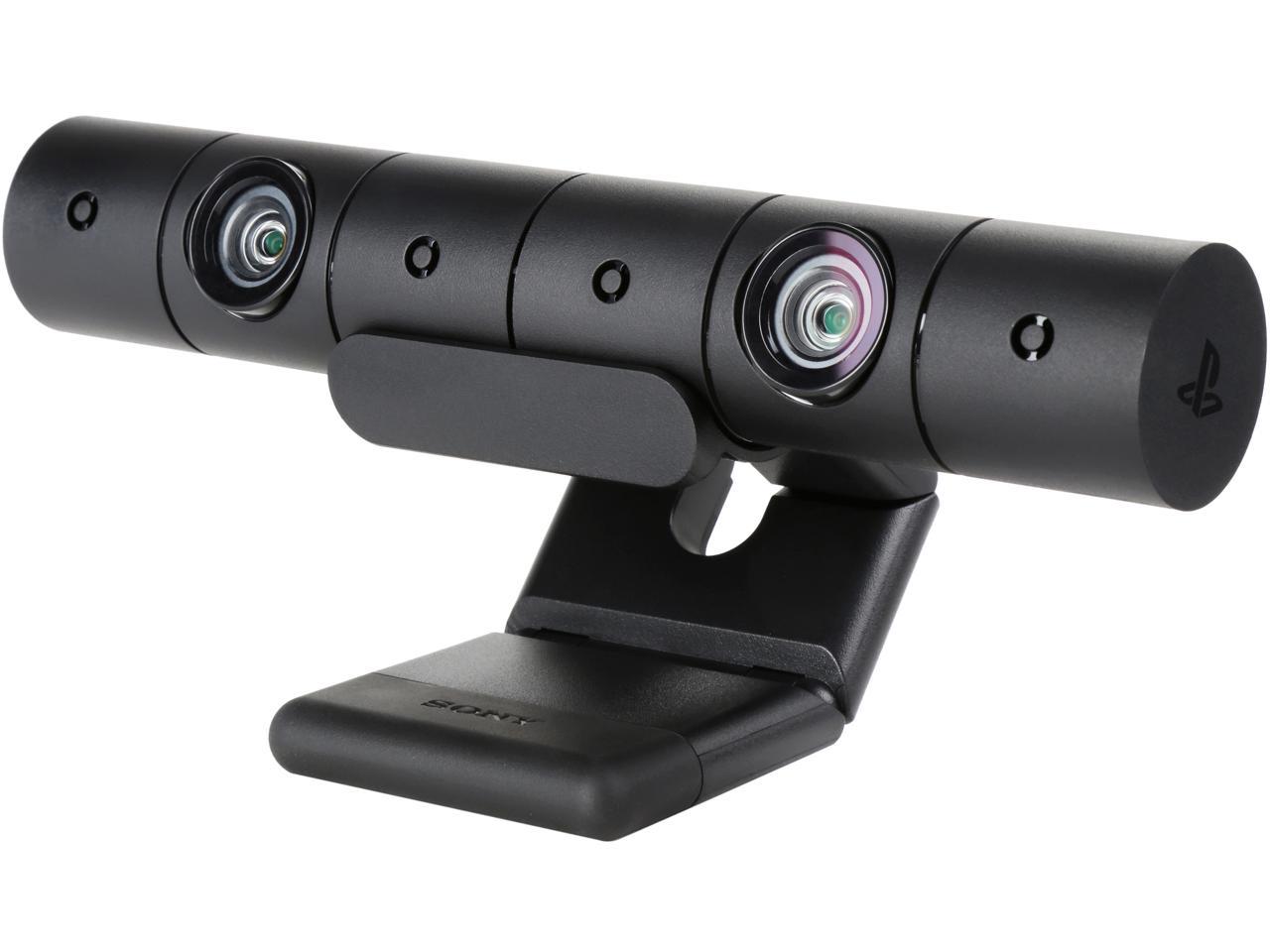 I was recently asked to go to an online video chat and I wanted to do it on my main desktop for a few reasons but I don’t have a webcam for this machine. After a bit of brainstorming however, I remembered that I do have a camera for my PS4 and when Sony announced the support for PS5, they allowed people to claim an adaptor for the camera to make it USB 3.0 compatible as opposed to the AUX adaptor which the PS4 required. I also have this free adaptor so I don’t have to build my own.

Request your own adapter here

After giving this a quick spin on my PC, I realised it was not going to be simple plug and play so I spent a bit of time digging on how to get this working for a call. Here’s what I came up with. Big shout out to Hackinside who’s built a great, detailed video on the technical part of this

NOTE: I did this on windows 10 machine with the second version of the PS4 camera. From what I read this should work on both versions of the camera but this is only built to work for Windows 10 devices AND requires USB3.0 ports

Getting the Camera displaying video

This repo above offers a zip download that is critical for this work. Download the files to a directory and plug in the PS4 camera. Ensure the USB port being used is a USB 3.0 one, you should see blue in the port as a general rule to know if it’s USB 3.0 and up.

You can keep an eye on the device manager going forward to see if these steps are working as expected.

However after all this work it will become evident why there were two camera lens on the camera:

The ps4 camera is built for specific hardware and specific software where these multiple streams are desired. However I just want a single image to use for video conferences. The way I’ve managed to do is using a nice piece of software called OBS, and a little bit of guidance again from Hackinside again.

First off, if you don’t have OBS, please download it, its a fantastic piece of software for streaming and recording. I’ve used it for these purposes before and it’s definitely up there with one of the most polished pieces of open source software I’ve come across.

With this installed, we can set up the camera feed to be the “source” and we should see the triple input on the preview pane: 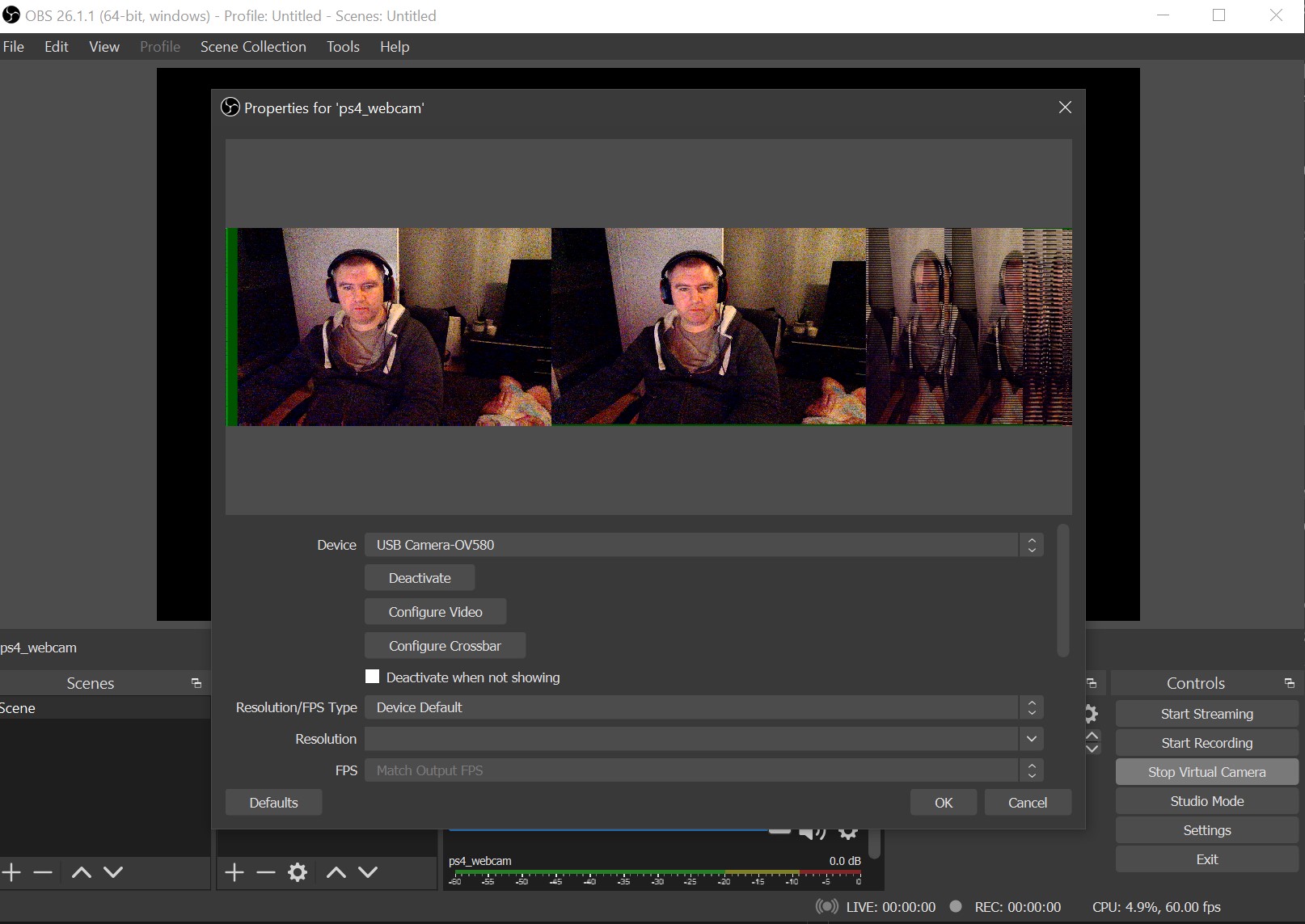 If you can’t see it, ensure you haven’t got the camera feed open elsewhere and if you do, close it and then reselect the input source on OBS

With this in place as the source, now we want to go to “Edit” -> “Transform” - “Edit Transform”. From here you should be able to start doing manipulations to the size and importantly, the cropping of the feed. This will depend on a few things so play around with this to find settings you’re happy with. Mine were (after a rough hacking) as follows: 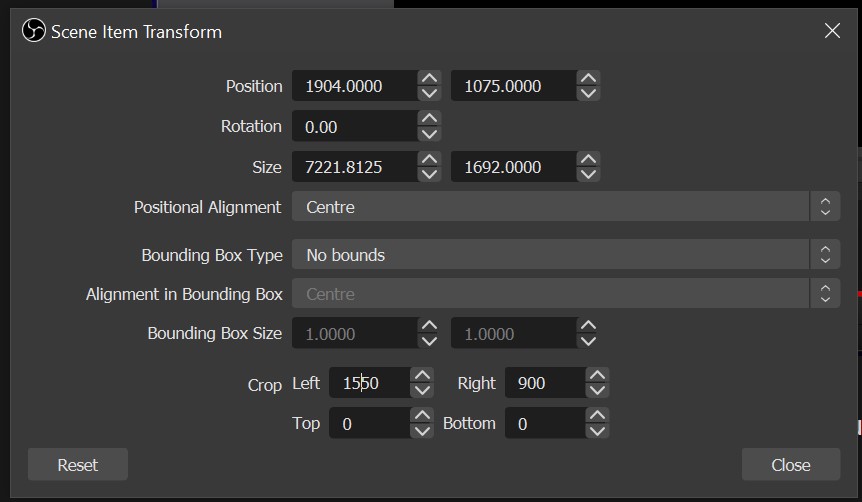 And with all that in place I now have a single image available:

Now you just need to hit “Start Virtual Camera” in the bottom right corner and you have a video input device available to select in multiple conferencing tools I tested with!

And that’s how I turned a PS4 camera into a webcam!